There were few photographs of me growing up.  I was shy.  I always looked away from the camera. Even now, I shy away from having my picture taken.  I see what other people say they don’t.  I see an ugly girl.  Crooked teeth.  A disheveled head of hair.  Glasses.  I see skin the color of someone my mother wanted me to be, the skin bleached with lemon cream every summer, face covered with make-up starting in seventh grade.  Shame.  I wear it still, I wear it well, and I wear it darker than I did in junior high school because I am trying not to be seen as the white girl.  I am trying to express in any way I can that despite the Scandinavian neighborhood I grew up in, my father is Chinese, my mother is Black.

Yet, it is only this past year, that I accidentally learned I could have straight hair.  That my hair dresser one day took it upon herself to blow dry my hair and then put a flat iron through it.  I cried.  As if for the first time I saw beauty.  At age sixty-three I have dark brown hair, highlighted with golden tones, laying flat, half-way down my back-straight hair. 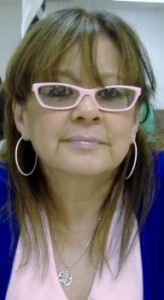 And, yet, why is it when a friend, at a recent high school reunion, showed a photo of nine-year old me, dressed in a navy skirt and yellow pinafore, a Dutch style hat on my head, I didn’t recognize myself.  I asked who is that girl in the front row of Brownies, the dark one amidst all the others.  My friend said, “That’s you.”  I said, “But it can’t be me, my mother would never have let me out of the house with frizzy hair.”  My hair was like a ‘fro spilling from the little Dutch cap, and it was like a memory jarring my experience of pomade and hot combs over gas flames, and  Tonette by Toni perms-until Mother learned to comb the solution through my hair without using the curlers, a reverse perm she called it-to straighten my hair.

My mother always told me I didn’t have good hair and I believed her.  Shame. How disassociated do we become from the beauty of who we are, based on myth?  How was having straightened hair as a child different from experiencing straight hair as an adult?  And why do hair dressers, and friends, and sometimes lovers like my naturally curly hair better than my straightened hair?  And, why, as a child and as an adult, was my curly coarse hair a curse?  (My hair stylist says my hair is not course, I just have a lot of it.) Not all white people have fine straight hair.

My mother had a passing jones.  I’ve come to understand that, accept that, know she only wanted her children to survive.  I didn’t know then what I know now-the history of racism in the United States.  My mother was afraid for her children’s safety with good reason.  But, was keeping those reasons from us necessary?  What if we had known why she had chosen to pass as white?  Would I have kept it a secret?  Continued the deception? Or feared for my life?

It was the early seventies and I spent time at bars drinking wine, lots of cheap wine with a friend I met at work.  We both loved short skirts, tall boots-cheap clothes we bought at Target.  Both a size three we could wear inexpensive clothes and have them look good on us.  We loved dressing up, going out, looking for love.  Her light brown hair was thin and a bit unruly.  My black hair was course and more than a bit unruly.  We were hip, but not hippies, but we both, for our separate reasons, ratted our hair, believing we had natural afros.  Perhaps it was the first time I felt I had the FREEDOM to express who I was, to claim what my mother couldn’t, that I was Black.

One night, driving home from a night out at the Depot with another friend of my friend, high on wine on yet another Thursday night to get us through Friday and another day at work, the conversation turned to hair.  And the girl in the front seat, next to my friend that was driving, turned around and said, “Why do you girls wear your hair like that”?  As often was the case throughout my life, I was surprised by her question, and personally offended.  And like so many similar conversations and responses, I said, “Because I am Black.”  And, then, on the freeway, she opened the car door and jumped out.  At least, that’s how I remember it.

I remember going with a friend, in the 90’s, to pick up her three-year old son who had been hospitalized.  We decided to celebrate his recovery by taking him to have his curly hair cut for the first time.  I said it had to be a barber, telling her how I took my son for his first hair cut.  How the barber sat him on the child’s chair on top of the barber’s chair, and I watched his locks drop to the floor.  (After that first hair cut, his hair grew in straight.  Hair doesn’t define who we are. )

It was a cold, snowy morning.  We entered a Saint Paul neighborhood barbershop near where my friend lived.  High in the barber’s chair was a boy with blonde hair, having his hair cut.  I was excited for my friend’s son to experience the ritual from baby to toddler in this environment where men sit on their throne, making small talk with each other.

The barber ignored us, as if we weren’t there.  We patiently waited. Finally, he bellowed, “What is it you want”?  We said, “A haircut like that” as my friend’s son stood there bundled in his little blue snow suit, the hood covering his head.  The barber replied, “I don’t cut hair like his.”  We stood there, silent.  Why didn’t we respond?  Why didn’t we scream, but, you have no idea what kind of hair he has?  Why did we, when he said, “the guy across the way, cuts hair like his,” walk away instead of protesting.  Shame.  Why didn’t we pull the hood from my friend’s son’s head and ask, “And, why can’t you cut his hair?” Why did we, after we made ourselves small, retreating from the barbershop, suddenly fill with outrage?  And why didn’t we follow through with contacting the better business bureau to report this barber who so boldly refused to wait on a brown baby boy?  It wasn’t about his hair.   It was about the color of his skin, the color of his mother’s skin.  It was about Minnesota not so nice.  And it was about sometimes we are just so tired of it all, sometimes we are just so tired.

The same friend and I, a few years later, went to a “we do ethnic hair” salon to get my hair cut.  They said I didn’t have Black hair!  Maybe I had mixed-race hair.  My friend said I had hair like her mother’s-are you telling me my mother isn’t Black?  What is Black?  Were they talking about my hair or the color of my skin?  Shame. Mixed messages.  Good hair.  Bad hair.  What is my hair?  Who am I?

My mother spent her life trying to keep her Black identity hidden.  Even in her 80’s, living in a senior high rise, she couldn’t admit she was Black.  A woman from the center washed and set my mother’s hair.  One day she braided Mom’s hair.  Then, she asked my mother if she was Indian.  There was a moment of awkward silence.  I finally let loose the family secret.  “She’s Black,” I said.  I had to remove my mother’s braids before she would go down to the dining hall for dinner.  Shame?

I wonder if my mother ever understood how beautiful she was. She was proud of her beautiful little girls, yet hid them, and didn’t tell them-but, later, living in a senior high rise, confined to a wheel chair, dependent on a multitude of prescription drugs she lit up when I dressed up pretty for her especially on holidays.  I like to dress up, have my hair pretty, and my make-up just so.  It isn’t always because I don’t want others to see me ugly (sometimes I actually go out in public without any make-up, hair uncombed), but because I enjoy the artistry of fashion, whether funky or classic.  I wear myself well.

This site uses Akismet to reduce spam. Learn how your comment data is processed.